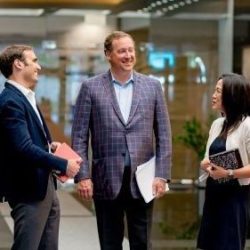 When people think about venture capital (VC), Silicon Valley, Boston or New York – not Baltimore – might spring to mind. However, Greenspring Associates, a leading tech-enabled venture capital investor headquartered in Owings Mills, Maryland, has long viewed its location outside of traditional venture epicenters as a competitive advantage.

Established in 2000, Greenspring was one of the first venture investors to offer an integrated platform combining fund, direct and secondary investments, and it has always maintained a singular focus and expertise in the space. This approach has given the firm unique advantages, as well as creating a culture that combines a blue-collar work ethic with a commitment to making sure venture capital is used to accelerate innovation, job creation and positive social change. By company estimates, the firm has, to date, directly or indirectly funded over 8,000 companies and created over 2.2 million jobs.

“Our vision is to create a better world by financing the global innovation economy and we feel that being good corporate citizens in the communities in which we operate and live is a key tenet of that vision,” said Ashton Newhall, the firm’s co-founder and managing general partner.

One of the larger, experienced providers of institutional capital within the venture capital ecosystem, Greenspring Associates provides support across funds, companies and secondary investments from early stages until just before a company is acquired or listed on the stock market. With a history of investing in diverse fund managers, Greenspring has demonstrated its commitment to advancing diversity and equality across the ecosystem.

Since its founding, Greenspring has built an investment model that has grown to over $13 billion in assets under management. That includes over $1.2 billion on behalf of Maryland-based clients, who range from individual investors and leading private institutions to a variety of public institutions such as county, city and municipal plans.

Greenspring’s offices span the world – including Palo Alto, Beijing and London – and supports businesses through investments in 8,000 companies across 44 states, either directly or through its managers. But its diverse team of over 125 is predominantly based in Maryland. Among the reasons for that: through its investments, Greenspring focuses on technology and healthcare, and feels that its home state is becoming a story of success for growth in startup activity.  Indeed, over the last decade, the number of venture-backed startups headquartered in the state has doubled and the amount of venture capital invested in the state has tripled, with Greenspring helping to accelerate this effort.